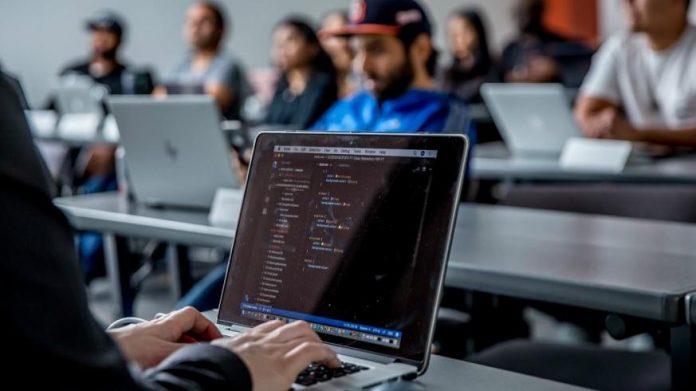 Growing up in the same town and sharing similar interests, Gregory Row and Joshua LeBoeuf were bound to cross paths at some point. But it wasn’t until they both encountered an online ad for the UNH Coding Boot Camp that their journeys aligned.

Both were thriving in the food-service industry—Gregory as a server, Joshua as a chef—but neither felt professionally fulfilled. What’s more, both had a love of video games and found themselves intrigued by the notion of creating them.

“I was waiting tables at a restaurant, but I really wanted to make a change,” Gregory said. “I kind of narrowed it down to programming, and while doing some research online, I came across this boot camp. It sounded exactly like what I was looking for.”

Joshua had a similar experience.

“I was working as a cook in kitchens and butcher shops, but I didn’t feel like I wanted to do it forever,” Joshua recalled. “I was always on my computer, messing with settings, over-clocking the CPU, rebuilding the hardware, and playing games. I was on Facebook when I came across an ad for the boot camp and thought, This sounds like something I’d be interested in.”

It’s perhaps unsurprising that Gregory and Joshua, who share so many things in common, became friends on the first day of boot camp.

“Everyone introduced themselves, and Greg said he was interested in eventually making games,” Joshua said. “That’s something that I’ve always wanted to do. So I ended up talking to him about that, and then we just kind of hit it off.”

Although they didn’t work on the three group projects together, Gregory and Joshua spent a lot of time helping each other with homework assignments and providing feedback on their separate projects. They both loved the challenging curriculum and found their final projects to be the most rewarding part of the program.

As expected, Greg and his group put their newly learned skills to work on a video game called Plexx.

“I thought the game wasn’t going to work out, but it became way more than I thought it was going to be,” Greg said. “It became a really cool programming-slash-art project for me because I drew the whole main level in Microsoft Paint. I had so much fun doing it.”

Joshua’s final project also had to do with gaming but on a grander scale. He and his group created a tournament-bracket generator that allows users to set up tournaments online for any game they desire.

“I decided I wanted to try something very challenging,” Joshua said. “One of the biggest challenges for me was getting the database set up correctly. I ended up getting it to work the day before the project was due, but it worked out very well.”

Both Gregory and Joshua recommend the UNH Coding Boot Camp to anyone interested in programming. It not only helped them land gigs immediately, but also created a true friendship in the process.

“If you put in the effort to do this, a ton of opportunities can open up,” said Joshua. “It really did change my life completely. It’s indescribable.”