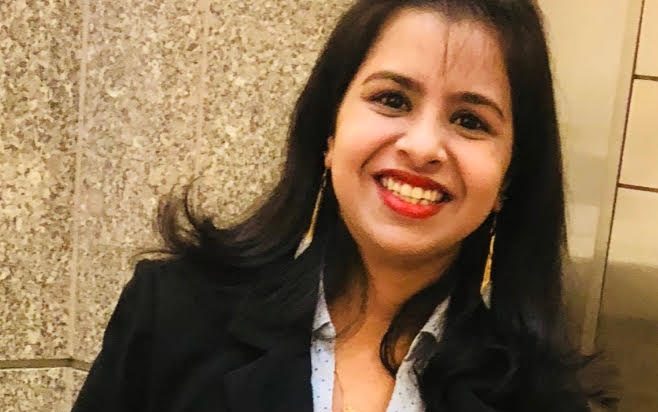 Restarting your career after time off is never easy. In technology, it can be even more difficult. But Anitharaj (Anitha) Sridharan was up for the challenge.

The New Hampshire-based stay-at-home mom had a B.S. in computer science from the Sathyabama Institute of Science and Technology in India, but upon moving to the U.S., she wasn’t able to find a position. Eventually, she gave up work to care for her two young kids.

As her kids got older, Anitha became stir crazy. She was anxious to get back to work in her field of interest: computer science. But this was easier said than done.

After three years, Anitha’s skills were already outdated. She knew she needed to upskill to rejoin the workforce.

That’s when she came across the University of New Hampshire’s Coding Boot Camp. The campus was close to home and the program offered an appealing combination of in-person instruction and self-study that would give her a strong new toolset.

Anitha briefly debated whether she really needed a 24-week boot camp. From her B.S., she’d had a strong base in HTML and CSS and she’d dabbled in online lessons as well. But in the end, the boot camp won out: Anitha knew that if she was going to make real headway, she needed more hands-on learning.

“My experience had been in much older technologies. The boot camp could help me to understand the newer technologies that are out there and how to work in a team setting,” she explained.

So she signed up.

The juggle is real

Anitha’s new schedule was intense from the get-go. Her husband would come home from work, and she’d leave him with the kids and dash out the door to class. She’d do homework during any spare time, usually snatched in the early morning, after class, or on weekends. She also took on an unpaid internship, doing WordPress development and working as a database admin.

After that, things got real, fast.

HTML, the starting point for the curriculum, came easily to Anitha, having studied it before. But as the curriculum moved into React—“a completely new world to me,” Anitha said—the challenges ramped up.

Twelve weeks in (the halfway mark), Anitha felt so overwhelmed that she even toyed with the idea of quitting. But her husband and her family encouraged her to stick with it and the boot camp’s team of instructors and coaches helped immensely. She especially credits her student success manager with getting her through the program. “Everyone was really supportive. And Joanna was just an incredible help for me,” Anitha said.

Relying on the boot camp’s network of support, she chatted with instructors and TAs via Slack, attended office hours, and got answers to pressing questions.

With their help, Anitha was able to learn perseverance. That, on top of newfound confidence, gave her the power to finish the course.

Anitha took full advantage of UNH’s Coding Boot Camp career services to support her transition into a new career. “The counselors were a huge help,” she said.

Thanks to the project-based curriculum of the program, Anitha not only had new skills, but a shining new portfolio to show for it. One of her projects, a community website for people with autism, gave her portfolio the impactful centerpiece it needed to help land her a full-time job.

Weeks before graduation, she was already being called in to interview for a full-time position at Hewlett Packard. In December 2017, she completed the course and immediately started working full-time at HP as a software engineer/UI/UX developer.

“Without boot camp, I wouldn’t have my job,” Anitha said, adding. “I’m loving it. Everything I’m doing in my job now, I learned at boot camp.”

Anitha ended up having such a wonderful experience in coding boot camp that she’s recommended it to a number of friends. “People want to be developers, but they don’t know where to go, so I tell them this program is really helpful, even if you’re starting from scratch,” she said.

Anitha acknowledges it was a challenge to care for her children and work through the coding program. But the hard and soft skills she acquired helped teach her that with perseverance, she would succeed. “If you focus on what you want to be, you will achieve it,” she said.